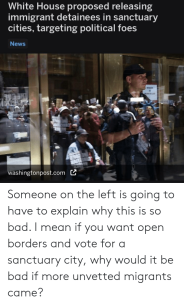 So again, we see utter hypocrisy from the left. Recall every leader of the Democratic party speaking of how much better immigrants [legal and illegal] are better than us? How they all improve America, admittedly some legal immigrants have contributed and assimilated in great ways. But not illegals. A drain on Americans votes, economy, tax dollars. Democrats have been pushing for open borders and speaking of “welcoming all immigrants both legal and illegal to the United States”.

So we have had increased cities nationwide giving sanctuary to illegals. So, President Trump made a dicey move. But it has paid off showing the true colors of Democrats and their ongoing flow of lies. Trump made a statement of moving migrants coming illegally and placing them in sanctuary cities. Since the Democrats were so vocal in welcoming them with open arms you would think they’d be getting a belated Christmas gift right?

Guess again. Funny how the left goes from saying we need to let all immigrants in to now spinning what is an obvious sleight of hand to distract from the truth, “Trump wants to dump migrants in Democrat cities”. I thought they were so great and they were welcomed by Dems? Why all of a sudden are they using every excuse to keep the amazing migrants out of their cities?

Some sanctuary cities include above median income neighborhoods, that is part of it. But it also at the root of it all shows that Democrats are all talk for purposes of election. They are fine when illegals are holding up in lower-income areas, because it is not their problem dealing with the violence, rises in crime, hinderance of children’s education, drugs and more. They want their votes, illegal or not. But they obviously after this latest outrage do not want these migrants anywhere near them, and claim Trump is using them as props.

No, the Democrats have been using these migrants for as long as we can remember. But now that Trump is calling them out to essentially put up or shut up, they are again showing their true selves and it was another smart play by Trump as it turned out to make this announcement. The Democrats went from let’s let all migrants in, to saying “dumping migrants” [ as well as liberal MSM ] as if they are garbage.

Spin it all you want folks on the left. The American people as a whole are not as stupid as you wish they were. They are seeing more and more each day that your talking points and hypocrisy are just that. You are not virtuous, you are not the moral party. I see an easy re-election in 2020 for President Trump. He only needs to keep his promise about a border wall, as that along with infrastructure are key issues he still needs to not only address but complete. Otherwise he’s done a damn good job.

One thought on ““Dems magically against migrants in sanctuary cities””