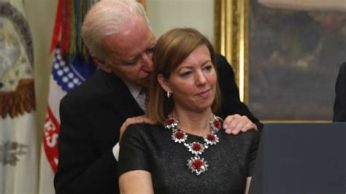 Former VP Joe Biden is at it again. Only difference is now the threat is to a sitting President where as before Donald Trump had yet to even win the Primary. So, after Biden’s ridiculous commentary about Trump only proves he’s another leftist hypocrite to no surprise. You just can’t make this stuff up. The new era of “WWF” style Politics is certainly here to stay. I’ll admit however it’s quite entertaining.

Creepy Joe has an odd history with young children and women to say the least. So when the former VP had a speaking engagement recently in Miami, where he spoke once again about “beating up people like that [Trump] in the High School locker room“. And said, “he would have beat the hell out of Trump in High School for disrespecting women” [He’s one to talk]. Regarding the out of context comment Trump made on the Access Hollywood bus over a decade ago in 2005. It is the absolute definition of “the pot calling the kettle black”.

Actions surely speak louder than words. For the record, regarding that video clip from 2005. Donald Trump never bragged about sexually assaulting anyone. He had commented in general about how powerful, wealthy, and or famous men tend to “get away with” more with women. Such as, women allowing more “things” to occur. Or women as we all know, do tend to “throw” themselves at men like that for an easy lifestyle among other luxurious benefits.

I am not knocking on these women, let’s be clear. I am simply debunking that false narrative. Trump spoke in general and was accurate in his statement. Was it a great thing to say? No, probably not. But he wasn’t wrong, it happens all the time. So creepy Joe speaking to the treatment of women is that much more ridiculous because again the narrative with Donald Trump wasn’t even a true.

So, knowing President Trump, he is not one to keep to himself in times such as this. So of course he had responded to Biden’s threats and comments over Twitter saying, “Crazy Joe Biden is trying to act like a tough guy. Actually, he is weak, both mentally and physically. yet he threatens me for the second time with physical assault, He doesn’t know me, but he would go down fast and hard, crying all the way, don’t threaten people Joe!”

Can’t say it is anything but entertaining. Picturing two dinosaurs in a brawl of sorts. “Trump with a swing, Biden almost knocked out of his prescription velcro sneaks.” Biden counters with a ball grab, but Trump quickly strikes as his diaper protected his “jewels”. “Both out of breath, they tag in their Secret Service agents to finish it”. Trump wins by TKO”.

I don’t know about you, but I would pay to see that. Of course it is beyond silly that a former VP and the sitting POTUS go to these lengths. But Trump is not one to take any flack, nor should he.

Biden however, talks all of this tough guy nonsense and pretends to give a damn about women when he is a creepy, inappropriate woman grabber at best. A deranged pedophile being the worst possible scenario. Biden, as you can see above, has a tendency to touch women and young kids boy or girl inappropriately.

From a dominating-type hand on the arm or shoulder. To kissing women and kids on the cheek, sometimes the mouth. Creepiest is probably the kissing and the smelling of young girls hair. It’s f***ing disgusting. Frankly, I personally would take Creepy Joe somewhere and beat the hell out of him. Any pedophile, especially ones that act on their disgusting imagination should be castrated and killed.

I couldn’t care less how strong that comes off. I’d ask anyone that thinks that, and ask them how could you not agree with me when it comes to an animal like that? They prey on innocent children, a lot of times causing trauma if not worse to these kids for the rest of their lives. The poor families don’t say anything because of Biden’s “authority”. They feel awkward about calling out a VP, now former VP. Not me, if I saw that SOB doing that to my kids especially but any child for that matter. I would call his old ass out right then and there. He’d best hope his security stopped me in time.

So this is what we have, a laughable style of politics going on. We have Joe Biden, who had for a while raised awareness about sexual violence, chairing the White House Task Force to Protect Students from Sexual Assault. He has worked to break down our society’s problematic ideas that normalize sexual assault, such as victim-blaming and slut-shaming. Yet, he himself commits the very acts he pretends to want to stop. Typical sociopath.

Biden proved that the whole Democratic Party statement, “When they [GOP] goes low, we go high”. Ha! So much for that, now it’s more like, “when they go low, we go even lower.” For that matter, the Dems don’t just “go lower”. They have been staying “low” as it were ever since Trump was a realistic POTUS nominee. Nothing but identity politics, lies, cover ups, virtue signaling and using children to push false narratives and propaganda.

Trump as we know is a bit of a narcissist, but he’s OUR narcissist. He may not be a perfect man, no one is. At least he doesn’t touch small children. Creepy Joe, you are no longer Vice President. No one cares about you reminiscing about your glorious High School days. But one thing I can’t stand, is a has-been who isn’t even running in 2020 as it was rumored. [Scared Joe?] Therefore, Biden is just stirring the pot. Keep it up, it will only help us come November.